I admit it: I just started watching Community. Yes, I know. Better late than never. I kept hearing how great the show was, but never got around to following it. Well, now, thanks to Hulu, I can binge watch while I’m cleaning house or laundry or whatever.

Lately, though, I’ve been hearing about this “Plot Embryo” for writers developed by Dan Harmon, creator of Community. 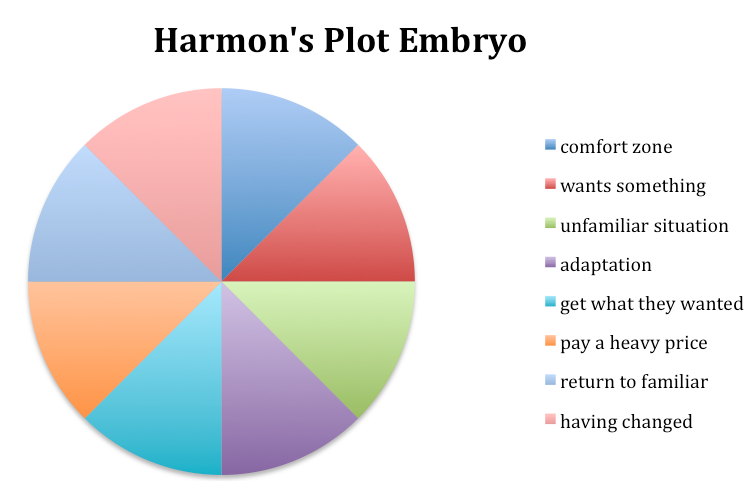 I decided to write twelve episodes for my series, Consortium, and I broke down each episode using Harmon’s method. The key is its simplicity. I re-worked each episode into the embryo, and will keep reworking them as I write.

Not only is it a way to outline a novel or short story, but–if the writer has already written a draft or two of it–it’s an excellent tool for evaluating what has already been written.

Defining each segment of the circle Simplified examples are the best teachers, so I’ve tried to plug in a familiar fairy tale to Harmon’s embryo.

Here are some more resources to learn about the Plot Embryo:

Check Harmon’s Embryo against the beats from Save the Cat and other story patterns. See also Comparing Story Grids.

Subscribe to my newsletter for updates on my novels.