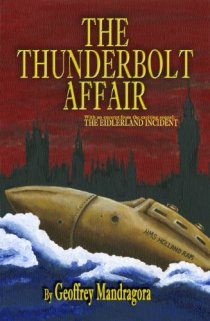 Geoffrey Mandragora is an author of steampunk. He is currently completing three years of rehab following a twenty year addiction to historical re-enactment.

I never made a decision because if I’d thought about in those terms I would never have started. I grew up as a storyteller; I was the guy at summer camp making up the scary ghost tales.

I wrote my first book at 12. It was 20 pages long and basically a sci-fi rip off of the Hardy boys. After that I just kept writing. I finished 10 novels, and they all sucked. Bad (my wife disagrees – there are hard copies of these in a suitcase under my bed. She really likes two of them and thinks I should re do them). Then I wrote one that I didn’t think sucked. Showed it to others who thought it didn’t sucked, and then I just kept on writing.

I was an officer in the US Army (Captain) for ten years (five active, five reserve). Everything I learned there shows up in my books, from petty rivalries between soldiers to counterespionage training to chemical/Biological/Nuclear warfare.

My degree is in political science with a minor in psychology. It helps me to craft political intrigue with individuals of various degrees of paranoia.

I went to a steampunk convention and enjoyed it thoroughly. When I got home I read a book by Pip Ballentine and Tee Morris, from the Ministry of Peculiar Occurrences series. I enjoyed it, but felt it really gave short service to the technology. There is so much more that could be done. A unified infrastructure that gives rise to the technological Victorian period. I wanted the sense of whimsey and fun like others but grounded in feeling of plausibility. My favorite review says: Tom Clancy walks into a steampunk bar.

Write every day. Write crap, that is how you learn. You can improve crap, but it is hard to do that if you have a blank page. I have been hit with inspiration maybe three times, and wrote effortlessly. Three times in four decades. You just have to keep putting one word after another.

Pay money for editing. Working with a professional editor will teach you a lot.

It is in the same alternative history as The Thunderbolt Chronicles, but ten years later. A disastrous biological/chemical war has devastated the European Empires. There are four remaining great powers; The United States is isolationist while the British Empire, the Japanese Empire, and the Russian Empire are expansionist, with Russia the big bear in the room pushing at the two island empires.

Nicola Tesla has fled the U.S., accused of attempting to murder Thomas Edison but is abducted before he can get to the British authorities for assistance. Each side wants his secrets.