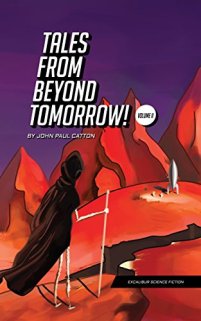 John Paul Catton and I follow each other on Twitter. He is the author of adventurous alternative histories and uncanny urban fantasy and lives in Tokyo, Japan.

I had been reading books and comic books ever since I was old enough to read. I studied Literature and Media Studies at university, and during that time, I started to think about not only absorbing the ideas from all the wonderful writers I had discovered, but also creating something myself. After graduation, I worked on one short story after another, getting them published in various magazines, until the time I felt confident enough to try a full-length novel.

After graduation I landed a editorial position at an entertainments magazine run by Northampton Borough Council, which was the town I lived in at the time. The job itself was educational – choosing words with precision, meeting deadlines, etc. – but by sheer coincidence, Northampton is also the place where Alan Moore lives, the author of “Watchmen”, “V for Vendetta”, “Promethea”, and many other groundbreaking works of literature. A mutual friend arranged for Alan to come and give a lecture at a local writer’s group, and meeting him in the flesh was like being struck by lightning. It totally pushed me in a new direction and opened my eyes to ways of writing that I had never before conceived of.

My latest book, published in March 2018, is Volume Two of “Tales From Beyond Tomorrow”. As to “why” I wrote it – some years ago, I had ideas for about twelve alternative history stories. Writing them as twelve novels would have taken twelve to fifteen years. Instead of that, I pared the narrative down to the essentials of plot and characterization, and released them as two omnibus volumes of novellas, novelettes and short stories. The volumes are also lavishly illustrated, and I’m privileged to be working with some immensely talented artists as part of the Excalibur team.

Be prepared for the long haul. I am trying to write one novel a year, coordinate the marketing campaigns, and at the same time hold down a full time job, because I don’t expect self-publishing to support me anytime soon. With twelve books now on Amazon, the Excalibur brand is just beginning to get noticed.

Excalibur Books is an independent publisher that is home to the writers Zoe Drake, Cody Martin, Jamie Carter, John Paul Catton, and administrator Jacob Smith who tries to keep everyone together. Our next release will be release # 13,  “Skywatchers” by Zoe Drake, Book 1 of the “Fiat Lux” series of supernatural thrillers. Following that, in 2019, # 14 will be “The Game of Exquisite Corpse” by John Paul Catton, Book 1 of the “Europe After The Rain” series of alternative history Dieselpunk science fiction. Also, if you sign up for the newsletter service, you’ll receive advance news of the Excalibur 2020 project, which is making us really excited but we can’t say anything about it yet (big hint: Excalibur Books is based in Tokyo, Japan)!